My friends, let me offer a peak at a little secret…. God is color blind.

Not that God can’t see color (the magnificence of a sunset suggests otherwise) but that He does not see color. All have equal standing before Him, in their sin and then in their redemption.

Red, brown, yellow
Black and white
They are precious in His sight.
(lyrics from Jesus Loves the Little Children)

I’m curious when we forgot this important concept?

I’m curious when Black lives started mattering more? And Police lives started mattering less? When did gay “rights” start trumping “religious” rights? When did we start needing to be “tolerant” of Islam but harshly critical of Christianity? When did it happen that a convicted mass murderer gets a dozen appeals to make sure justice is done but an innocent child can be murdered in the one place she should be safest? 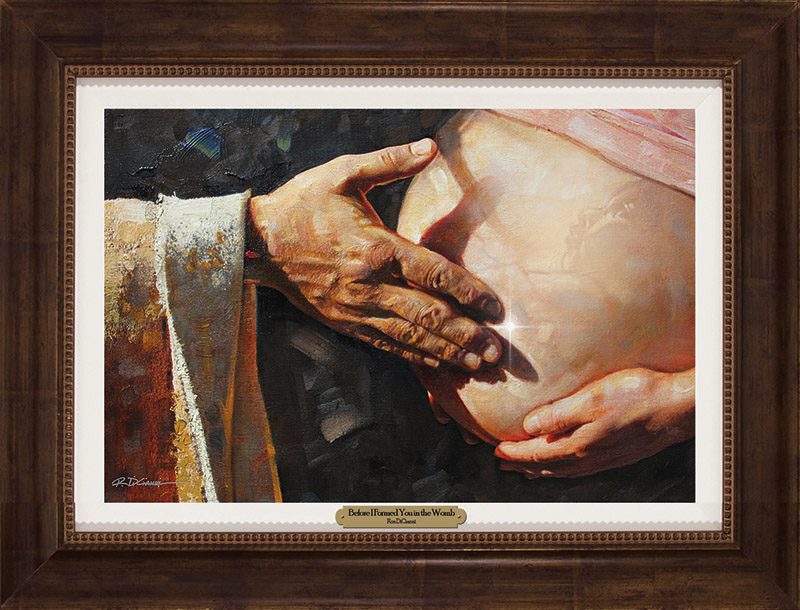 Before I Formed You in the Womb by Ron DiCianni

That’s one of the messages behind the painting Before I Formed You in the Womb. That God creates each life, and has a purpose for each life. That each life is sacred. That’s what God’s Word tell us.  Click on it to see more about this mission.

So, when did things get so messed up? Ever wondered that?

I can tell you if you want to know.

It’s when people realized that by dividing us they can get a bigger slice of the pie than if we all stay together.

Think of this for a second… 12 kids at a party. All are waiting for a piece of cake. 3 rows, 4 columns. 12 slices of cake. You start with the birthday boy and go around and each kid gets the same slice of cake. Sure, Sarah’s may have more frosting because it’s an edge piece and Billy’s may have more filling because it’s a middle piece or the kid at the end may have had to wait the longest because he was at the end of the table but on the whole, each kid received an the roughly the same piece, right?

Now, imagine that one of the kids was sitting at your arm 60 minutes before the cake cutting…”I want an end piece. I want a big piece. I want the flower.” Go away kid… you’re bothering me (said in the best W.C. Field’s voice). But he keeps nagging. “Last party Sarah got the biggest piece. And this party I want it. I always get the smallest piece.” And he keeps at it. During the pin the tail on the donkey. As you’re opening presents… “I want I want I want, life isn’t fair, poor me.”

And as you go to cut the cake, he’s still there pulling at your sleeve – me, me, me.

What are you going to do? Most of us parents (me included) just want to the kid to shut up so we cut a little bigger sliver of cake, complete with flower and extra frosting and give it to him right after the birthday boy, just to shut him up. We think we’ve done good but the net result? His strategy worked. By making himself not one of the group, he got more then the others, sooner.

Interestingly enough, this happened to me at a school function last year. This kid was incessant with the “poor mes” over whipcream. So, I slipped him some extra. Another student pulls me aside and said “he does that with every new parent helper… and he got you too”. Sure enough the rest of the kids agreed, it was his thing. He had learned that instead of standing in line as one of the group, if he could separate himself from it and claim a special victimized status he would get more, sooner.

And there you have the genesis of why we have so many groups bucking the status quo and claiming special status – because they know they will get more.

But the problem with that (beyond the fringe dishonesty of it) is that it bucks a very simple concept of God’s structured order – that in Christ, there is no Jew, Gentile, Slave or Free. In Christ, there is no need for equality because there are no divisions based on color or race.

And let’s be honest, when the police are rolling around on the ground with someone resisting arrest do they really think about the color of that person’s skin? Or are they just fighting for their life at this point?

I think we all know the truth. Including those who would argue otherwise.

Don’t let the hype distract you from the truth. All Lives Matter.