This post was written and originally posted By Dr. Robert Straube, on his blog The Five Fold Ministry. Please visit his website for more information on this topic.

When we look at the Five Fold ministers, we need to understand how they work together for the good of the church, the body of Christ, the Bride of Christ. Let’s look at each of them, their calling, preparation, how the are set in, and how we are to respond to them.

(Note: When I say “he” in the references that follow, it is for writing ease and not for gender designation. Both male and female can be called to the Five Fold Ministry. So, where you read he, see it as “he/she.”)

The Five-Fold Apostle
The word apostle means, “one sent forth.” An apostle is sent forth by God to minister with God-given authority.

He/she is a pioneer who establishes churches and lays foundational truth in people’s lives
(Ephesians 2:20). Apostles could be called “spiritual builders” (1Corinthians 3:10). They have oversight of the body (1Corinthians 4:15).

The ministry of apostle is the most neglected of the five-fold ministries in the Church today. There are many pastors, teachers and evangelists, a few prophets, but very few apostles. One reason behind this is that apostles do not fit into denominational hierarchy. They cannot freely function within the structure of committees, elected leadership and denominational red tape. The ministry of apostleship is an area much in need of restoration to the Church by the Holy Spirit.

Few people are familiar with the ministry of the apostle. In fact, most people think that the original twelve disciples are the only real apostles. Although they hold a special place as the original apostles, the Bible mentions many other apostles including Matthias (Acts 1:26), Paul (Acts 14:1, 4,14), Titus (2 Corinthians 8:23), Epaphroditus (Philippians 2:25), Silas and Timothy (1 Thessalonians 1:1, 2:6). Also Andronicus and Junia, listed in Romans 16:7 were possibly Apostles. This shows that there were apostles after the original twelve.

The first and foremost apostle is Jesus Christ (Hebrews 3:1). 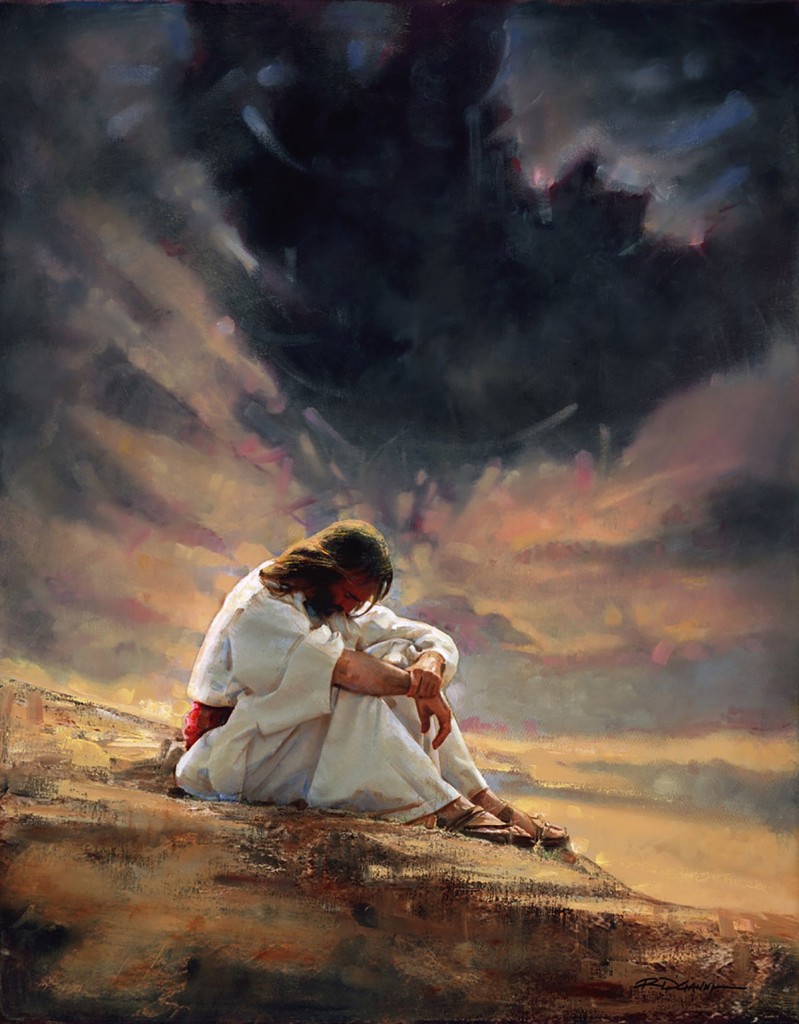 Ron DiCianni – Jesus in the Wilderness

He was sent forth from heaven on a divine mission for the Father. Jesus chose the original apostles (Luke 6:12-13), trained them (Mark 3:14-15) and commissioned them (Matthew 28:19-20; Acts 1:1-8). The book of Acts reveals how the apostolic ministry functioned in the early Church. As the apostles traveled and evangelized, they saw a need for permanent leadership in the churches they established. As a result, they ordained men to be elders, pastors and overseers in each five-fold ministry, including apostles. The Bible does not teach that apostleship was to cease. Rather, the Word teaches that apostles are much needed in the body of Christ.

The Five-Fold Prophet
A prophet is one who speaks for God to man. He does not necessarily have to foretell the future, although that is a valid prophetic ministry. He does foretell a word from God that reveals God’s plans for the Church. God uses prophets to give direction and correction to the Church. According to 1 Corinthians 14:3, prophecy is given to edify, exhort and comfort the Church. In other words, prophecy should build up, stir up and cheer up. Prophetic words that tear down the body and depress the people are not from God. Prophecy always serves to encourage and strengthen. Sometimes a hard message, a correction, will come forth, such as a call to repentance, but it will always result in building, not destroying. A good example of a New Testament prophet is Barnabas, who is called “son of consolation or exhortation” (Acts 4:36). He exhorted the body to purposefully and steadfastly hold onto the Lord (Acts 11:23-24). Other New Testament prophets are John the Baptist (Luke 1:76) and Agabus (Acts 11:27-28; 21:10-13). John was sent forth to speak as a prophet through the tender mercy of God (Luke1:78). True prophecy will always be tempered with mercy.

The Five-Fold Evangelist
The evangelist is a messenger who proclaims the good news. He brings the lost to salvation and exhorts Christians to witness for Christ. Phillip was a New Testament evangelist who preached the Word with signs following. His preaching and miracles led to revival and great joy in Samaria (Acts 8:5-8).
In his second letter to Timothy, Paul sets forth the work of an evangelist. He is to preach the Word, be ready at all times, reprove, rebuke, exhort with patience, be watchful and endure afflictions (2 Timothy 4:2-5).

The Five-Fold Pastor
The word pastor literally means, “shepherd.” A pastor is the shepherd of a local church flock. He is responsible to teach, exhort, protect, correct, comfort and discipline his flock. He has authority to watch over the flock (Hebrews 13:17) and to be an example (1 Peter 5:2-3). As a good shepherd, the pastor leads the sheep to pasture and water. One of his main duties is to feed the flock (Jeremiah 3:15; 23:4; Acts 20:28; 1 Peter 5:2-3). False shepherds feed themselves rather than their flocks (Ezekiel 34:1-6), but true shepherds are under Jesus, the Chief Shepherd (1 Peter 5:4) and they follow His example (Psalm 23). 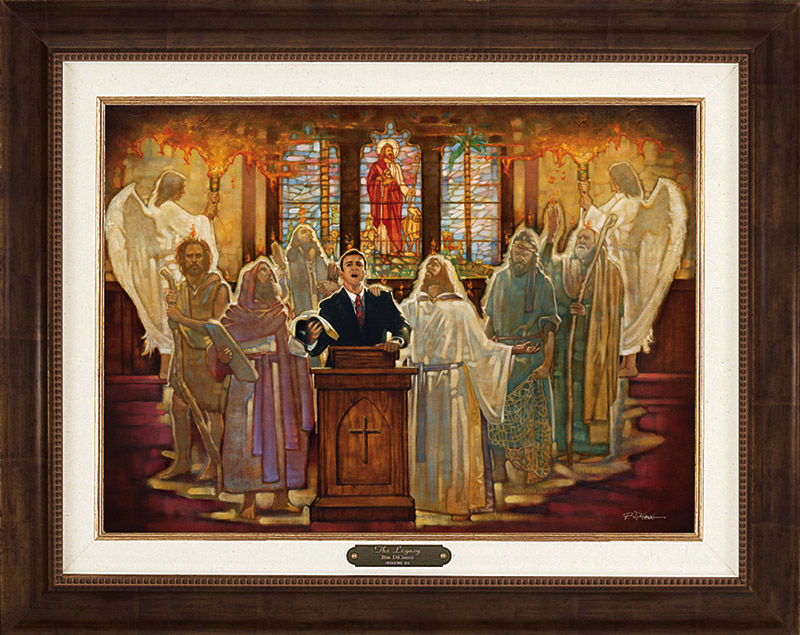 A canvas reproduction of artist Ron DiCianni’s “The Legacy”

The Five-Fold Teacher
A teacher is one who expounds and interprets the Word of God. He does not just impart knowledge, but living truth, which can be applied to the lives of people. Teachers build on the foundation laid by the apostles and prophets (1 Corinthians 3.10). All those who function in the five-fold ministry must be “able to teach” (1 Timothy 3:2).

The Calling of the Five Fold Ministers
God divinely calls those whom He has chosen for leadership. Out of His many disciples, Jesus chose only twelve to be apostles (Luke 6:13). At the beginning of the book of Romans, Paul said that he was also “called to be an apostle” (Romans 1:1). This divine call is an absolute prerequisite for leadership. The five-fold ministry is not something that you just volunteer for. There are far too many who were not sent; they just went. These volunteers usually result in much more harm than good, both to the individual and the Church. An example of this can be seen in the life of Moses (Exodus 2). God had divinely saved him from death and was preparing him for leadership. However, Moses took matters into his own hands and ended up causing trouble for himself and all of Israel. It took God forty years to fully prepare him for his call (Acts 7:22-30). Likewise, God desires us to be ready before we are called into leadership.

All believers are called to minister unto the Lord in prayer, worship and giving; to minister to the body in exhortation, comfort and love; and to minister to the world by witnessing of the saving grace of Jesus Christ. We all have enough to do without volunteering for leadership. When God truly calls us we will have a definite“knowing” and so will a praying, seeking church. Acts 13:1-3 “Now in the church that was in Antioch there were certain prophets and teachers: Barnabas, and Simeon who was called Niger, Lucius of Cyrene, Mansen who had been brought up with Herod the tetrarch, and Saul. As they ministered to the Lord and fasted, the Holy Spirit said, ‘Now separate to Me Barnabas and Saul for the work to which I have called them.’ Then, having fasted and prayed, and laid hands on them, they sent them away.”

When God calls someone to a work, He will reveal it to the church leadership. We do not have to continually ask to be sent out or try to work our way into a position. Where God guides, He provides! All we must do is obey Him in doing what is set before us, rest in Him and allow Him to open doors for leadership. In doing so, our gift will make room for us (Proverbs 18:16).

The Preparation of the Five Fold Ministers
Those whom God divinely called are also divinely equipped and prepared. God always prepares before He sends out, and this takes time. Jesus called twelve men and then prepared them for the work of the ministry. Their only call was to follow Him (Matthew 4:19). A disciple is simply one who follows another’s teaching. Many times the disciples just sat and listened to Jesus. Likewise, we must sit down before we can be sent out. We must learn before we can teach. We must be disciples before we can be apostles. We must follow before we can lead.

The disciples were also called to obey Jesus. Obedience is a great teacher. In fact, without obedience it is impossible to learn from Jesus (John 7:17). The Lord continually prepares us as we continually obey Him.

One who is fully prepared for leadership will know God and himself. God often prepares us by revealing our weaknesses, as He did with Moses. We must learn to trust fully in Him, not in our own natural strengths and weaknesses. A leader will also have a thorough knowledge of God’s Word. A list of qualifications for leadership is given in the following passages: 1 Timothy 3:1-7 “This is a faithful saying: If a man desires the position of a bishop, he desires a good work. A bishop must be blameless, the husband of one wife, temperate, sober-minded, of good behavior, hospitable, able to teach; not given to wine, not violent, not greedy for money, but gentle, not quarrelsome, not covetous, one who rules his own house well, having his children in submission with all reverence (for if a man does not know how to rule his own house, how will he take care of the church of God?); not a novice, lest being puffed up with pride he fall into the same condemnation as the devil. Moreover he must have a good testimony among those who are outside, lest he fall into reproach and the snare of the devil.” Titus 1:7-9 “For a bishop must be blameless, as a steward of God, not self-willed, not quick tempered, not given to wine, not violent, not greedy for money, but hospitable, a lover of what is good, sober minded, just, holy, self-controlled, holding fast the faithful word as he has been taught, that he may be able, by sound doctrine, both to exhort and to convict those who contradict.”

The Ordination of the Five Fold Ministers
When a person has been called and fully prepared by God, the Holy Spirit will lead the Church to ordain him into the ministry. He will have proved his faithfulness and ministry in his local church (2 Timothy 4:5). The elders of the church will seek the Lord as to when to ordain him. They will not ordain a novice, or a new Christian (1Timothy 5:22). The Bible gives no technical terms to describe the way to be admitted to the ministry. Ordination involves appointing and “setting in” ministry by the laying on of hands and prayer. This publicly confirms God’s call and approves a ministry. The laying on of hands imparts the spiritual strength and gift to be a leader (1 Timothy 4:1,4; 2 Timothy 1:6).

Our Response to the Five-Fold Ministry
Now that we understand the five-fold ministry, what should our response be?

Second, we must submit ourselves to their oversight (Hebrews 13:17). Submission is an attitude of yieldedness and love.

Fourth, we should not gossip about leaders, but go directly to the source in the presence of witnesses to straighten gossip out (1 Timothy 5:19-20). We need to be loyal and faithful to the elders.

The five-fold ministers were given by Jesus for the Church. We need every minister that God has provided. One or two are not enough; we need all of the five-fold ministries. As God restores these ministries to the Church, we must correctly respond to them. God’s purposes will not be fulfilled outside of His divinely appointed leadership.

The Holocaust was Legal Blog Post by Grant DiCianni »